Favorite Feeling in the World 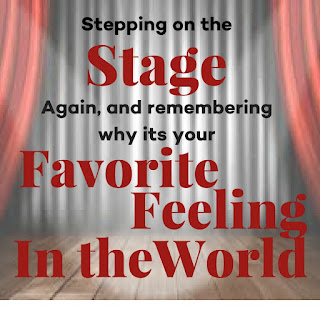 “Life is like a theatre, but the question is not if you are in the audience or on the stage, but rather whether you are where you want to be?”

I am where I want to be – that is for sure! I love being on stage!

I had a flashback before hitting the stage a few weeks ago for a preview show. I remembered stepping on stage the first time when I was in High School.  I had a solo in a Christmas show.  I was nervous. I was unsure of myself.

What would people say? What would people think? I’m too fat to be in the spotlight! I’m not good enough to sing this song! What if I can’t remember all the words? Will they laugh? I’ll be fat and a horrible singer!

When I was younger I never really felt accepted.  I was overweight. Timid in a way. Unsure of myself. With that one solo, I found how to be accepted. People looked beyond my weight and focused on my ability. I cherished it!

I suddenly became “the singer” – oh, you’re that singer! I always use to be the chubby one, or the fat one. But I was now “The Singer!”

I can handle that!

So, I threw myself into performing. Musicals at school. Solos in the choir. The singer in a high school big band. Whatever I could do I did. It gave me the confidence to try out for cheerleading. Because, you know, who doesn’t want “the singer” on your cheerleading squad?

Went to college for musical theatre. Did summer stock. Was asked to go to New York and jumped at the chance. But, when I got to NYC I was told I was too ethnic. Maybe if I lost some weight.

Ummm…how does getting thinner make me less ethnic?

But I persevered.  Got in a broadway show … that closed before it actually opened. I know, just my luck. And, I came home.

I did try my hand at community theatre when I returned to St. Louis, but the goofy spring blossoms messed up my sinuses.  I constantly lost my voice. I couldn’t sing. And, I suddenly lost my identity.

I wasn’t a singer anymore. I was just fat.

I tried being as bold as I thought I use to be. People believed me too.  To this day people believed I had a lot of confidence. Well… I am an actress after all.  I kept up the facade. I spoke well in front of people. I smiled and powered through. But, I really was hiding. I hid behind my size. No one can hurt me if I stay well padded.

No one except me. I was hurting myself. Thank goodness I finally said “ENOUGH!”

Fast forward to earlier in the month…

I have never had so much fun as when I was with the creative team at Take Two Productions and the wonderfully talented cast of It Shoulda Been You. 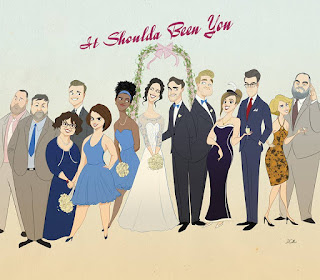 I know it has been a bit since the show opened, but the feeling remains. A glow, an energy, a peace that I haven’t felt in a long time. Something I want to hold on to and want to repeat again and again.

I wasn’t hiding. It was all me on stage. After 20 years of not stepping on stage, I returned with a vengeance! And, it was the most fun I have every had!

I have been cast as Abuela Claudia in R-S Theatrics production of In The Heights!