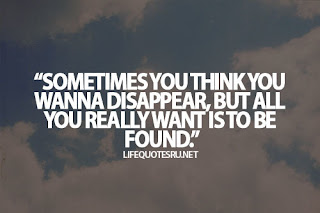 “Give light and the darkness with disappear of itself.”
– Desiderius Erasmus

“You’re disappearing!” a friend said the other day. Of course, it was a compliment to acknowledge the amount of weight I have lost.

But what an interesting reference. Disappearing is not my intended result. In fact, if I’m honest, it’s quite the opposite.

I want to be seen, heard, found, acknowledged.

When you’re big, it seems easier to disappear. You aren’t noticed as much – even though you take up so much more room than other people. People seem to think that larger people are not as smart; dismissed as slow, lazy. We’re not, of course. But I can see where that impression can be made.

And, when you are noticed it’s for the simple fact that you are big – look at that slob or damn she’s huge!

So, it seems that I am now disappearing to be seen. Interesting, isn’t it?

I have been complimented often lately. People greet me as I’m walking around. Is it because I’m a smaller size now? Is it my sense of accomplishment on sticking with my plan?  Is it the endorphins that I find when exercising? I now lift my head up more rather than look down when walking. I feel better looking people in the eye when meeting them. I have a bounce to my step and a smile on my face a lot more lately.

So, while my body is disappearing, my confidence is growing.

Take a look at that!