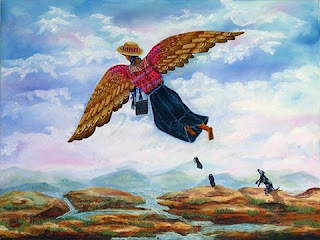 “I have come to accept the feeling of not knowing where I am going. And I have trained myself to love it. Because it is only when we are suspended in mid-air with no landing in sight, that we force our wings to unravel and alas begin our flight.”
― C. JoyBell C.

I have met up with a few people that hadn’t seen me in a while. Feels good to be told how good I look. But after a little while the conversation makes its way to the question, how much do you want to lose? Or, what’s your goal? Or, how many more pounds?

Truthfully, I’m not sure.

I know when I started I felt that a good 100 pounds would be good to lose. That would get me in to a “normal” range. I’ve never really felt “normal” about anything – let alone my weight.

There was a certain amount of acceptance I felt about my weight. I had come to accept my size when I was big, without really realizing I had. Perhaps that’s not the right term. Perhaps it was more defeat than acceptance.

I’ve known I had to “do something” about my health and weight for some years now, but never could get a grip on… what? Myself? My thoughts? My future? Ok. I just couldn’t get a grip. Period.

It wasn’t until my sister was diagnosed with cancer that I knew I really had to do something. It wasn’t so much a feeling or a recognition, it was more of a push. I finally felt like the saying I once saw – “I didn’t know rock bottom had a basement!” I had gotten to the basement.

I don’t want to be corny and say “the sky’s the limit!” But, I also don’t want to give it a definitive number. If I give it a number will I be happy when I get there? Sure, I’ll be happy I reached a goal, but quite honestly, getting started on this journey and actually making it through right now is something to be really proud of. It’s a heck of a goal already.

No. I think my goal is to be healthy. I’ve never really been healthy before. Sure, high school while I was a cheerleader and actually being active everyday. But that was just one year.

When I face-planted on the metal window sill and fractured my nose I had to have a CTScan. They discovered that I had had a mild stroke sometime in my past. I went to see my doctor. She had me take an MRI. (I hate those by the way.) She told me that it was very common for these mild strokes to occur without being noticed – especially given my health history.

My high cholesterol, my out of control diabetes, my high blood pressure, my enormous weight – all contributed to this mild stroke. No. I was not at all healthy. I was going about my business of being huge and getting huger (is that a word?).  It really shouldn’t have surprised me. I guess it’s because I never felt a thing. I had gotten accustomed to being big.

But now I want to get accustomed to being healthy! No. I don’t know what my goal is. I don’t know where I’m going, per se. I just know I am heading in the right direction now.

This is a new feeling of freedom. I am spreading my wings and beginning to soar to a new level of living I hadn’t had since – well that one year in high school. And, it’s about time.